South of the Alps - Ticino

Invasive new plants
In the South of the Alps the level of invasion by new plants is higher than in the rest of Switzerland, either by the number of species or by the intensity of their presence on the territory. This situation induces a strong pressure in the vegetable and field crops, as well as in the ecological compensation areas that are bound to increase in the future.

In Switzerland, the corn rootworm is still considered a quarantine organism, and continues to proliferate throughout Europe. In Tessin, the neighbouring of the main occidental Europe outbreak (Lombardy) allowed to develop an efficient fighting strategy for eradication in the North and control in the South. The control strategy, although efficient, causes considerable production constraints for producers. It is necessary to optimize the control strategy in order to find the balance between the pest control and the economical benefit of corn production. At the time, the knowledge about migratory dynamics still is insufficient to allow attaining this goal

Flavescence dorée phytoplasma, a quarantine organism, is present in the South of the Alps since 2004. The works conducted lead to the development of a fight strategy, a phonological model for alert (CTI project) and to new knowledge of the biology and ethology of the vector Scaphoideus titanus. The optimal use of information from the model needs the development of a simple and efficient sampling method, as well as a better knowledge of the role of alternative nutritional hosts and principally of the relationships between plant, phytoplasma and vector for an optimization of the fight strategy in the long run.

Fusariom wilt and mycotoxins
Corn crops for human food reached a given importance. The corn mycotoxic flora in our areas shows a somewhat different species composition than this of the rest of Switzerland. The pressure of this fungus complex generally remains high and causes more and more quality problems of the harvest. Neither hybrids nor local varieties currently cultivated have ever been tested for their tolerance to the current mycotoxic flora complex.

Plant protection in covered vegetable crops
With vegetables grown under cover, new solutions are increasingly needed to reduce the use of synthetic plant-protection products and develop new control strategies. Current research projects focus on evaluating the efficacy of resistance inducers, biological control, the actual tolerance of varieties to fungal and viral diseases, and the development of a product-dosage model adapted to the growth of the plant. 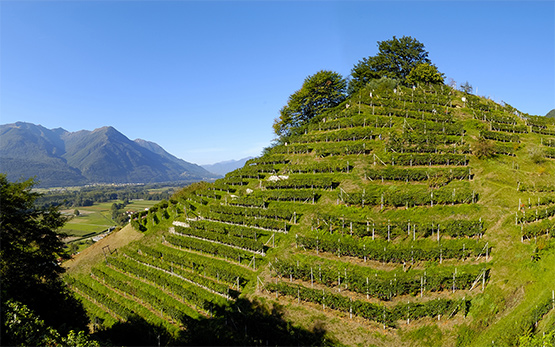 The areas in the South of the Alps have different pedologic, climatic and ecologic caracteristics than those of other Swiss areas. In consequence, several phytosanitary problems are specific for that area or are amplified in their frequency of their severity.