Since 1993 the promotion of ecological aspects, especially the enhancement of faunistic and floristic diversity, has become a main aim of the Swiss agricultural policy. These efforts include regulations concerning the application of pesticides, the balance of the nutrient budget, the crop rotation, livestock husbandry and the maintenance of ecological compensation areas. Direct payments are a crucial element in the new agriculture policy as a compensation for reduced prices for agricultural products and special ecological services. Since 1999 the farmers only have access to subsidy payments if the above-mentioned conditions are fulfilled. One of these conditions is to set aside 7% of the farmland as ecological compensation areas, including different types of extensively used grassland, hedgerows and bushes, wildflower strips or other elements.

What are extensively managed meadows and meadows used at low intensity?

Extensively managed meadows and meadows used at low intensity are mown at least once a year; the first cutting takes place late in the year: depending on the altitude of the meadow not before 15th June, 1st or 15th July. Mulching is not allowed. Chemical plant protection is prohibited; exception: single-plant treatments of problematic plants with herbicides which are authorized for this purpose if the mechanical control is too time-consuming. Extensively managed meadows are not fertilized at all whereas meadows used at low intensity can be slightly fertilized with manure or compost.

What are conservation headlands?

Conservation headland strips at the crop edge are border strips with a crop cultivated at low intensity. The strips are neither fertilised with nitrogen nor treated with insecticides. They are either sown with arable forbs or vegetated naturally. A large-scale weed control is not allowed. The strips are kept for at least two years at the same location. Conservation headlands may considerably increase species diversity in arable land.

What are wildflower strips?

Wildflower strips are perennial ecological corridor elements in the arable land sown with indigenous forbs and legumes. They normally remain not longer than six years at the same place. Fertilisation and treatment with insecticides are not allowed. Moreover, a large-scale chemical or mechanical weed control is not allowed. Many studies have shown that species diversity and abundance of several organisms (e.g. insects, spiders, small mammals and birds) are enhanced by wildflower strips.

What are rotational fallows?

Rotational fallows are areas sown with indigenous forbs and legumes that are integrated in the crop rotation. They remain at the same location for one to three vegetation periods. Fertilisation and treatment with insecticides are not allowed. Moreover, a large-scale chemical or mechanical weed control is not allowed. Rotational fallows may considerably increase species diversity in arable land.

What are improved (species-rich) field margins?

Improved field margins are extensively managed, species-rich field margins, mainly adjacent to crops or grassland. Their origin may be natural regeneration or an old sown wildflower strip (only with special permission) or they are sown with a seed mix consisting of native forbs, grasses and legumes. These margins are neither fertilized nor treated with pesticides (exception: single-plant treatments of problematic plants with herbicides which are authorized for this purpose if the mechanical control is too time-consuming). Ideally improved field-margins stay at the same place for many years. 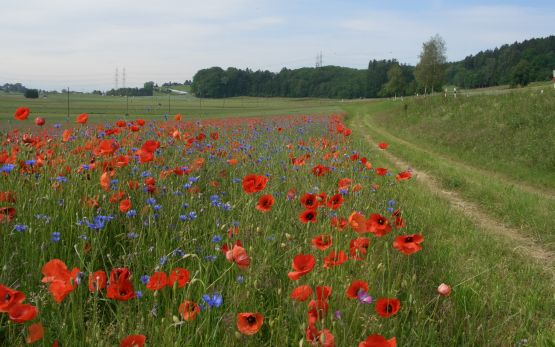 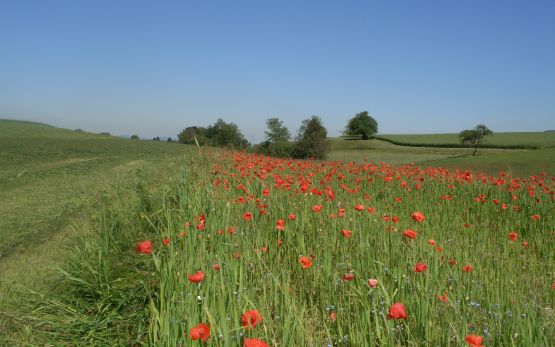