To produce sour milk, micro-organisms are added to milk, which is the fermentation substrate. The temperature is set to the optimum for the relevant micro-organisms and, once the desired acidity is reached, fermentation is greatly slowed down or interrupted by reducing the temperature. The product is ready for consumption. Further technological conditions must be met if the product is to satisfy requirements such as consistent quality and a shelf life of several weeks. The current widespread distribution of sour milk types like yoghurt, kefir, etc. would be inconceivable without industrial-scale production and compliance with the aforementioned quality requirements. The technical solutions hitherto devised for the individual manufacturing steps bear a close relationship to the quantity produced. In smaller companies producing only one or two batches a day, the expenditure on fermentation monitoring and system control is very different to that of large enterprises processing several hundred thousand litres of milk into sour milk products.

A basic distinction is made between the production processes for set and stirred products. 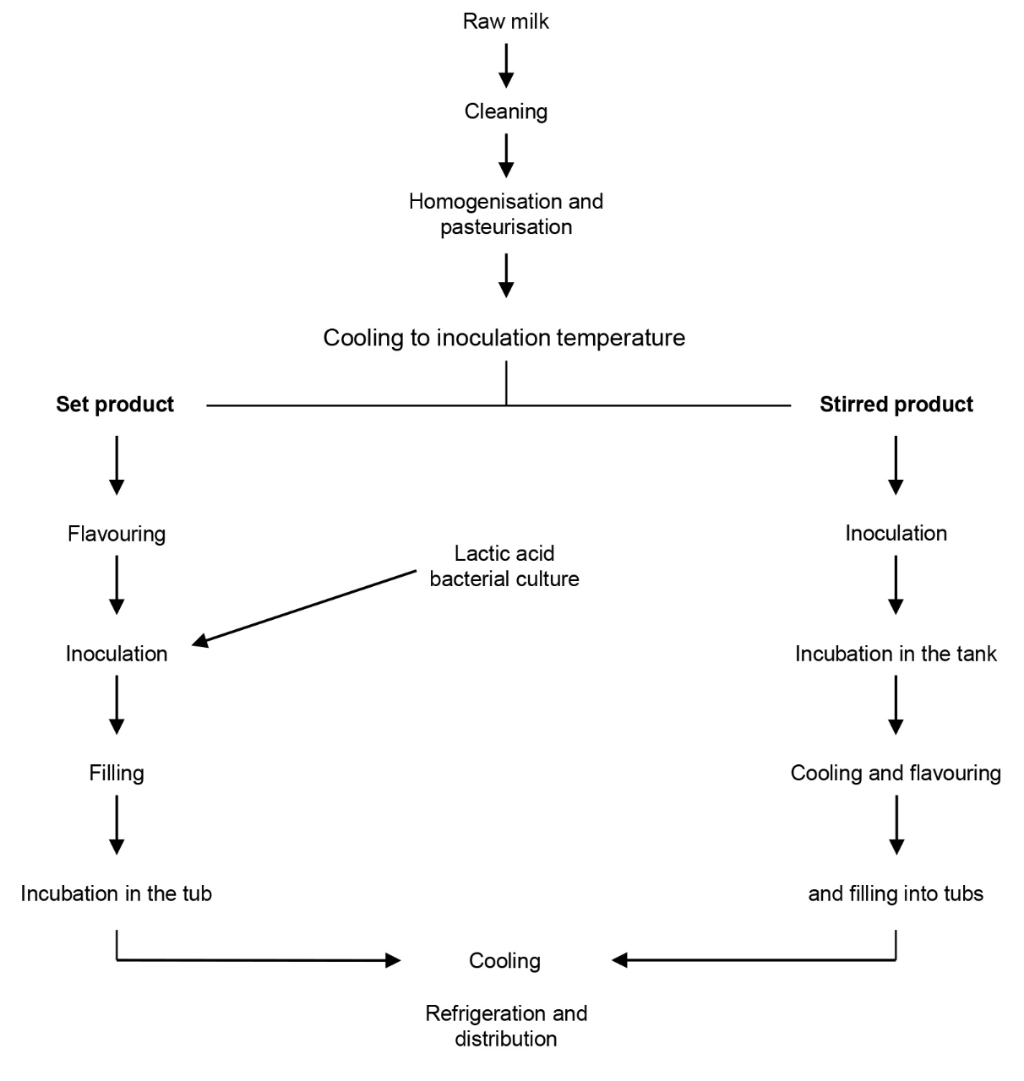 The technology centres on optimising conditions for the progress of lactic fermentation and, if necessary, yeast fermentation. An active starter culture is required in addition to temperature and a nutrient supply. The manufacture of sour milk products is discussed below using yoghurt as an example.

The raw milk must meet the following quality criteria:

The following influences on raw milk quality may affect the taste and smell of yoghurt.

Although the watering down of milk does not lead directly to defects in smell or taste, it does have a negative influence on the consistency.

The quality of the milk delivered to the dairy is recorded and its taste and smell checked. The raw milk is then tested to detect any inhibitory substances. If free from inhibitors, the milk is heated in a plate heat exchanger and taken to the separator. Here specifically the heavier contaminant particles which are not retained by the filter are separated out and the fat content of the milk and cream is adjusted to the desired level.

The milk is then pasteurised in the plate heat exchanger and cooled to below 5°C. This initial heat treatment is necessary because in general too much time elapses between milking and yoghurt production. The milk, separated into fat content stages, is stored in tanks pending further processing.

In addition to extensive reduction of the raw milk flora, the purpose of heating is also to influence the consistency of the finished product. The milk to be processed is homogenised if it contains fat.

The object of increasing the dry matter is to improve the firmness and viscosity of the yoghurt gel and as far as possible to prevent the whey separating out. Dry matter may be increased by the measures listed below:

In practice the non-fat dry matter is generally adjusted to around 10% in order to achieve the desired consistency. The measure most frequently used is the addition of skim milk powder. Specially designed milk protein concentrates are also increasingly added. The use of evaporation plant for water removal is not economically viable for most yoghurt producers due to insufficient capacity utilisation.

The heat treatment of yoghurt milk is intended primarily to kill pathogenic bacteria, at the same time reducing other micro-organisms and inactivating enzymes such as lipase. The main aim of increasing thermal stress compared with that of standard milk pasteurisation is to improve the structure of the yoghurt gel. Studies show that the denaturation of the whey proteins has a crucial influence on gel firmness.

It is therefore advisable to heat the yoghurt to between 85 and 95°C and hold it at that temperature for a few minutes. The denaturation rate for the heat-sensitive β -Lactoglobulin B should be between above 90 and 95%, although over-intensive heat treatment can also produce taste defects.

Lactic fermentation is the most important process in the manufacture of sour milk products. The production time and properties of the end product depend on the qualities and activity of the starter culture.

The traditional yoghurt culture comprises Streptococcus thermophilus (Streptococcus salivarius ssp. thermophilus) and Lactobacillus bulgaricus (Lactobacillus delbrueckii ssp. bulgaricus). Both micro-organisms have a symbiotic relationship, i.e. they are mutually beneficial during fermentation. The optimum souring temperature of the yoghurt culture is between 42 and 44°C, and incubation takes around 3 hours until the desired acidity is reached. Both micro-organisms perform better in symbiosis than if grown separately. The pH value of the unsoured milk meets the requirements of the streptococci, so they grow quicker at the start. The increasingly acidic surroundings then favour the lactobacilli, whose pH optimum is under 4.5. Initially Lactobacillus bulgaricus benefits the growth of the streptococci by releasing the amino acids valine, leucine, histidine and methionine from the milk proteins. For its part Streptococcus thermophilus promotes the growth of the lactobacilli by creating minute amounts of formic acid. At least in the initial phase the mutual stimulation of the two species in the mixed culture cause more lactic acid and aromatic components to be formed faster than would be the case with the sum of the two single cultures.

The smell and taste of soured milk products are characterised by numerous volatile metabolites, some of which are byproducts of lactic fermentation or are produced by other reaction mechanisms. The most important aromatic components are acetaldehyde, acetone, acetoin and diacetyl in addition to formic, butanoic, acetic and propionic acids.

The typical aroma of yoghurt is characterised chiefly by acetaldehyde. Lactobacillus bulgaricus plays a greater part in the production of acetaldehyde than does Streptococcus thermophilus. The aromatic constituents, although fewer in quantity, also make a substantial contribution to the overall aroma.

The smell and aroma of fermented milk products are rounded off by cleavage products resulting from the slight lipolytic and proteolytic activity of the starter organisms. The lactobacillae are generally considered to be more proteolytically active than the streptococci.