Benefits and Risks of Macroorganisms for Plant Protection

Parasitoids and predators are among the organisms used for biological pest control in agriculture. We investigate the potential ecological risks posed by new plant-protection macroorganisms, as well as their benefits for a sustainable agricultural sector.

Both microorganisms (fungi, bacteria, viruses) and macroorganisms (parasitoids, predators and nematodes) are used for the biological control of pests in agriculture.  According to the Swiss Plant-Protection Ordinance, these organisms must be approved before being placed on the market. As part of this approval process, we evaluate the ecological risks of macroorganisms for plant protection on behalf of the Federal Office for Agriculture (FOAG). With the aim of improving risk analysis, we work on the methodology and international procedures for regulating macroorganisms for plant protection.

New species, which are either distributed deliberately for plant protection or introduced accidentally as invasive pests, can have impacts on the native ecosystem. An example of this is the harlequin ladybird, Harmonia axyridis, which was imported into Europe for the control of aphids. This species has displaced native ones, and is nowadays the most common ladybird in Switzerland. The spotted-wing Drosophila suzukii, which develops inside fruits, was introduced accidentally into Europe and is already causing damage in soft and stone fruits as well as in viticulture. Gaining a better understanding of the causes and mechanisms of these invasions is crucial for enabling us to take preventive action and develop suitable control strategies in future.

Project Title:
Benefits and Environmental Risks Associated with the Use of Macroorganisms for Plant Protection

Many predatory beneficials are able to utilise alternative food sources when prey is limited. If they manage to ensure their development and reproduction in this way, they could gain a competitive advantage over other species. This factor may allow immigrated or introduced exotic species to displace native ones.

Macroorganisms are a common means of protecting plants from pests. International guidelines define how they are to be used. Agroscope evaluates the potential environmental risks of such macroorganisms on behalf of the Federal Office for Agriculture. 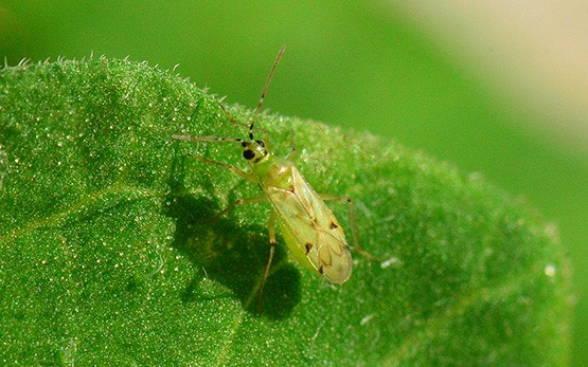 Herbivorous insects are often attacked by a variety of natural enemies. To know the interacting species and their impact when combined is a prerequisite for efficient and safe biological control.

The ability to survive during winter poses one of the most important barriers for establishment of species in temperate climates. To assess, during the biosafety evaluation, whether an exotic natural enemy can establish itself, it is therefore important to know its overwintering strategy and cold-tolerance.