Agroscope has developed the foundation of a methodology for assessing the sustainability of Swiss farms. From summer 2016, a set of indicators will be tested on around ten farms. Sustainably managed farms form an important basis for healthy, fit-for-the-future food production.

The assessment of a farm’s sustainability is a vital step in its optimisation. Here, equal consideration must be given to the criteria concerning the three dimensions of environment, economy and society. Agroscope has developed appropriate indicators, and published these in May 2016 in the ‘Agroscope Science’ publication series.

These indicators are the foundation for enabling farmers, consumers and associations as well as interested actors and stakeholders from production, processing and trade to develop a comprehensive farm sustainability assessment. Particular attention is devoted by Agroscope to the social dimension. This field still lacks sufficient resilient and practical indicators that are tailor-made for Swiss farms.

Four project teams developed indicators for assessing social sustainability, with a focus on the three areas of human well-being, animal welfare, and landscape aesthetics. Here, it was shown that the Well-being Concept of the Organization for Economic Cooperation and Development (OECD) represents a good basis for depicting the various aspects of human well-being. To this end, key questions allowing the relevant topics to be described simply and concisely were developed for each sub-aspect such as e.g. work/life balance, social relationships and subjective well-being.

Owing to the relevance of the topic for agriculture, a project team devoted itself to the calculation of temporal workload. On the basis of the ‘ART Work Budget’ software developed by Agroscope to calculate the expected working time, we derived an indicator by comparing the theoretically derived working-time input and the workforce available on the farm.

A further project team noted that using a simple indicator to assess animal welfare cannot cover all of the requirements. The researchers therefore propose a point system that manages without observations or measurements on the animal itself. In this system, points are awarded to measures with an anticipated positive impact on one of the twelve animal welfare aspects taken into account in the existing Welfare®-Quality Protocol measuring instrument, e.g. freedom of movement or the absence of pain.  In order for points to be awarded, the anticipated animal welfare must go beyond the minimum stipulated in the Swiss Animal Protection Law. Follow-up projects will now aim to determine whether a correlation does in fact exist between the number of points awarded and the level of animal welfare.

Indicators for the economy and environment

Agroscope has also developed indicators for the economic and environmental dimensions; detailed information on these can be found in the relevant Agroscope publication of May 2016. The economic sustainability of a farm can be illustrated by two key figures in each of the following areas: profitability (earned income per family labour unit and total return on capital); liquidity (cashflow-turnover rate and dynamic gearing ratio), and stability (investment intensity and investment coverage). The environmental dimension of sustainability encompasses the components of resource efficiency, effects on climate, nutrients, and ecotoxicity, as well as biodiversity and soil quality.

Practical testing of the indicator set is carried out in close cooperation with the involved farmers. The test determines the practicability, utility and acceptance of a sustainability assessment at farm level. In addition to the refinement of the indicator set, a scientific analysis of the results is planned. The project will be concluded with an in-depth report at the end of 2019. The results obtained are meant to contribute to the implementation of a practical solution for assessing sustainability on a large number of farms. The project is financially supported by the Migros Cooperative Association (MGB). IP-Suisse is actively involved in data acquisition. 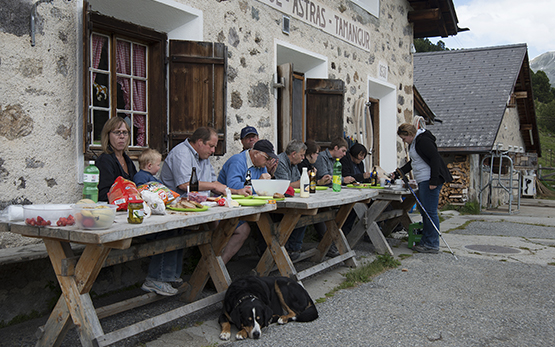 A social affair: During a chat – here, over morning coffee – problems are aired, solutions discussed, and interpersonal relationships fostered.

Cost-efficient: The use of modern electronics will improve efficiency during harvesting in the future. 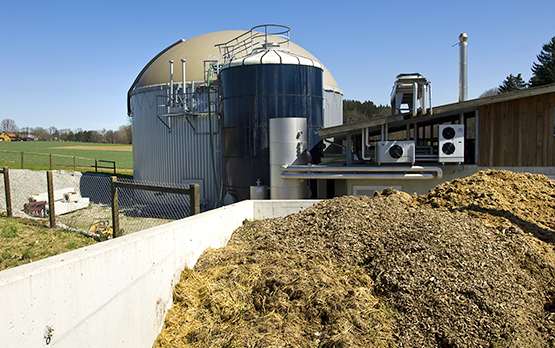 A biogas plant produces renewable energy and improves the sustainability of a farm.