Digestibility and Nutritional Value of Food – How Are They Linked?

Sustainable use of resources is vital in order to continue to meet the nutritional needs of a steadily growing global population. It is therefore important to consider the quality of foodstuffs as a function of their ability to supply the organism with nutrients in an efficient manner. With this in mind, the in vitro digestion and intestinal transport systems developed by Agroscope in collaboration with its European partners represent a major advance in this field.

Consumers in Switzerland are well acquainted with the nutritional information on the labels of the majority of food sold on the market. This information tells us about the amount of macronutrients (protein, carbohydrate and fat) and micronutrients (vitamins and minerals) in the food in question, thus allowing us to evaluate the amount of each food we would need to consume in order to ensure a balanced diet. Do the nutritional values mentioned on these labels truly match the amounts that will ultimately be utilised by our bodies, however? In other words, does the bioavailability of nutrients not influence the nutritional value of the foods containing them?

Digestion and its impact

To answer this question, we must bear in mind the process of digestion of these foods, which comprises the oral phase (chewing), the gastrointestinal phase (digestion), and the nutrient transport phase (absorption). Nutrient bioavailability is in fact dependent on the quality of digestion, intestinal transport and metabolic activity of the microbiota (the sum total of the microorganisms living in our gut).  These factors can vary not only from one person to another as a function of numerous genetic and phenotypical parameters (such as lactose intolerance or age), but also from one food to another as a function of its macro- and microscopic structure. In a food economy characterised by a constant increase in processed products, changing the structure of foods can therefore influence their nutritional quality.

Fermented dairy products offer a unique opportunity to analyse the impact of processing on the bioavailability of nutrients in foods. Specifically, whereas the nutritional content of full-fat milk and natural yoghurt are similar, does the conversion of the milk into a fermented product influence the bioavailability of the nutrients it contains? Using dairy products as a food matrix model since 2009, Agroscope has focused closely on these questions, taking part in different projects via numerous collaborations.

Nutritional studies have been conducted to evaluate the nutritional impact on the human organism of the conversion of milk into yoghurt or cheese by means of fermentation. To do this, it was necessary to consider the bioavailability of the nutrients, bearing in mind that a nutrient derived from the foods can generally only be active if it is first of all effectively absorbed by the body. These studies therefore aimed to document the nutrients and metabolites contained in the fermented dairy products and which appeared – following the digestion of these products – in the blood and urine of the subjects that absorbed said products.

The era of metabolomics

Over the past five years, metabolomics research projects have proliferated owing to spectacular developments in liquid or gas chromatography technologies coupled with mass spectroscopy. The said technologies have enabled a revolution in the detection and simultaneous identification of thousands of molecules – a revolution that can be compared with the development of DNA sequencing technologies. Whilst sequencing technologies have enabled the identification of the human genome (genotype), metabolomics should soon enable the analysis of the products of human metabolism – metabolites – which are the final actors in any biological system (phenotype).

Agroscope projects have enabled the quantification of several thousands of molecules appearing in the blood of volunteers after the ingestion of milk or yoghurt. A large part of these molecules – specifically, the essential amino acids – come directly from these foods, but do not appear in the blood until digested by the human organism. Another proportion of these molecules come specifically from fermented dairy products, and are thus detected directly in the blood. More than a hundred molecules differentiating the composition of milk from that of yoghurt were also measured in the blood in the hours following the absorption of these foods by healthy subjects. After subjects consumed these products for two weeks, measurements of their fasting blood metabolome allowed the identification of several dozen metabolites distinguishing the consumption of milk from that of yoghurt. Studies are currently underway to determine whether the different metabolites identified in these subjects after the consumption of fermented dairy products can be interpreted specifically in terms of new nutritional properties provided by the milk fermentation process. These pioneering results are ushering in a new era of food-quality evaluation, particularly in terms of the impact of the technological processing of foods on the human metabolism.

In vitro digestion as a screening technique

In this context, Agroscope aims to highlight the nutritional properties of foods fermented with cultures selected from the Liebefeld strain collection. Because this collection consists of over 10,000 strains, it would be impossible to conduct a human interventional study with a fermented dairy product prepared from each of these strains. Now, by taking milk as a model food, Agroscope has played a decisive role in developing an in vitro digestion method harmonised at European level. These studies have provided us with a detailed understanding of the digestibility of dairy products by associating the in vitro process with a state-of-the-art analysis of these nutrients. They have also demonstrated that the processing of dairy products via fermentation has an impact on the speeds at which the milk proteins break down into peptides and amino acids.

To complete this model of digestion, Agroscope has set up a laboratory intestinal transport system consisting of a human intestinal cell culture forming an impermeable barrier to the transport of nutrients. The analysis of the dairy products digested in this system has allowed the identification of peptides derived from milk proteins which seem to be specifically transported across the intestinal barrier. By challenging the principle that the intestinal barrier will only let through amino acids and small peptides, these studies are blazing a new trail in nutritional research. 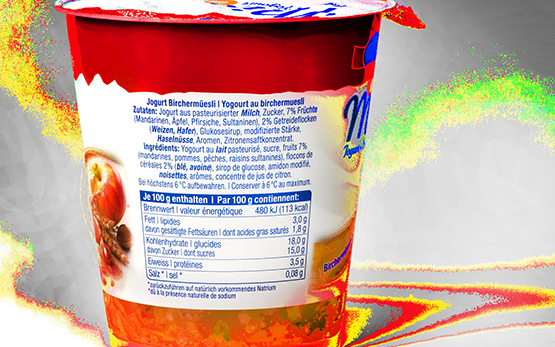 Declaration of the ingredients on food packaging is the norm in Switzerland, and helps consumers optimise their nutrition. 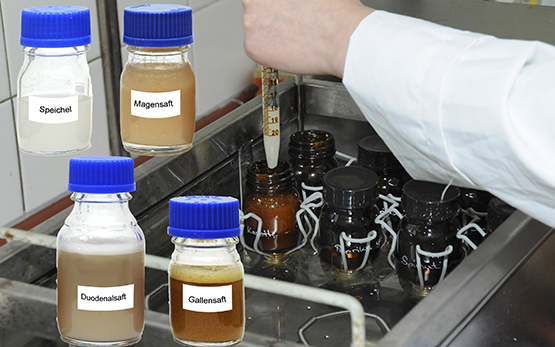 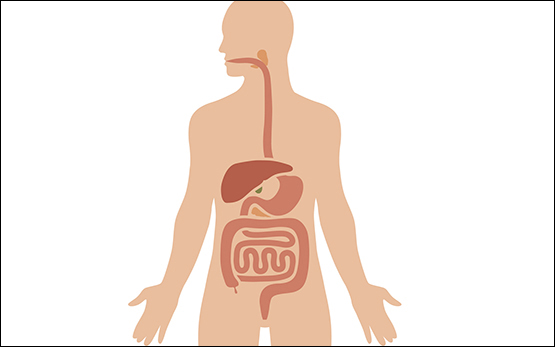 In vitro digestion: This method provides information on how well the individual constituents of food can be digested by an organism (second picture: fotolia). 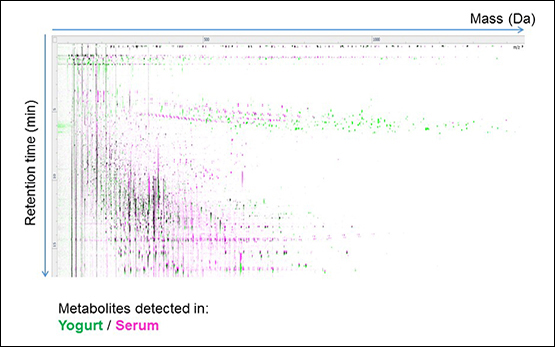 In future, metabolomics will help researchers determine how food constituents act on the human metabolism.

Agroscope plays an active role in numerous partnerships, in particular, the ‘NutriChip’ (from the programme nano-tera.ch) and F3 (=Function Fermented Food) projects in collaboration with the EPFL (NutriChip) and the CHUV (F3), as well as the European FoodBAll project and Infogest, the later project forming part of the COST programme. These programmes aim in particular to develop research tools which allow us to determine the bioavailability of nutrients.