Worldwide, soya is consumed in a number of forms, such as soya milk, tofu, and soy sauce, to name just a few. Outside of Asia, it is used primarily for animal feed. Despite this, the food market is experiencing strong growth. In this context, Agroscope has bred some pleasant-tasting varieties of soybean that are perfectly adapted to the Swiss climate.

Soybean is a legume or pulse native to northeastern China. Tofu, whose nutritional qualities are widely recognised, is made by curdling soya ‘milk’ with nigari (magnesium chloride), a process that was probably discovered over 2000 years ago. Tofu is rich in protein and polyunsaturated fatty acids (20% oil and 40% protein). Moreover, it is an important source of calcium and iron, and is rich in Omega 3s. Beneficial from a dietary point of view, soya represents a useful meat substitute for vegetarians, and a welcome source of variety in our diet. In Europe, the different products derived from soya are eliciting growing interest.

Soybeans are a strategic source of protein in a global context. Currently, nearly 80% of soybeans grown worldwide are destined for animal feed, and over 80% of global production is provided by GMO varieties (ISAAA, 2014). The main producer countries are situated on the American continent. In 2012, at the instigation of Austria and Bavaria, the ‘Danube Soya Association’ (www.donausoja.org) was created with the aim of supporting European research as well as the sustainable and local production of non-GMO soya, thereby giving a fresh impetus to this protein crop in the regions of Europe favourable to its growth. In Switzerland, soya breeding was launched in 1981, thanks to initial funding by Nestlé. The Agroscope breeding programme (video: Breeding soya (in French)) has enabled the successful development of new varieties adapted to our specific climatic conditions. Breeding is now focused mainly on the production of high-quality soybeans for the human diet, without disregarding the forage aspects.

A short growing season and a high, stable yield are the two main objectives of the programme. North of the Alps, a tolerance to cool temperatures during flowering is the paramount consideration for ensuring a consistent yield. Very early, stable and productive varieties obtained from a wide genetic diversity were the first major innovations of the Swiss breeding programme.  Soybean leaf area, very often excessive in the Swiss climate, has been successfully reduced by breeding small-leaved strains and by selecting for lanceolate, long and narrow leaves. Resistance to lodging, pods which do not shatter (indehiscence) or even tolerance to the various existing diseases are part of the agronomic standard (cf. Agroscope website: Improvement of plants and varieties).

Organoleptic quality of the bean

Prized by Asians, the typical grassy taste of soya is deemed unpleasant by Westerners. It results from the oxidation of fat by enzymes known as lipoxygenases, present in three different forms in the bean. Varieties with an improved taste have been developed by eliminating the main enzyme responsible for the development of this beany flavour. With the support of biochemical markers, new populations without lipoxygenase have been bred.

The quantity of tofu obtained per kg of dry beans, referred to as ‘tofu yield’, is a varietal criterion. Tofu yield naturally depends on the quantity of proteins (albumins) present in the bean, but also on the composition of these proteins. This characteristic is influenced by the relative proportions of the different protein subunits (glycinin / conglycinin). The firmness of the tofu – a key aspect – is also closely associated with these parameters. Studies are currently being conducted to determine the ideal protein profile depending on the product (soya milk or tofu), and backcross programmes for integrating these favourable protein compositions are underway.

Organic soya production for human consumption is booming in Switzerland. In partnership with the FiBL and thanks to additional funding from the Coop Group, Agroscope has recently set up comparative trials under artificial weed pressure. The aim is to determine whether the varietal differences in the competitiveness of soya with weeds are sufficient to lead to original varieties adapted to the needs of organic production (Press Release FiBL in German).

Through the its improvement programme, Agroscope is contributing to the development of one of the rare legumes present in crop rotations, and to the establishment of a European protein strategy. Since 1981, 45 new original cultivars have been registered in different national catalogues in Europe, certain of which have enjoyed resounding commercial success. To give an example, the protein content, which peaked at 37–39% in 1988 (Gehriger, 1988), reached 42–44% in 2014 (Schwaerzel et al., 2014). Agroscope’s ‘Proteix’ variety regularly reaches the 45% protein level, whilst ‘Falbala’ achieves a protein content of up to 50%. The first Agroscope varieties lacking the grassy taste, such as ‘Aveline’ and ‘Amandine’, offer interesting prospects, and others are also cultivated in Switzerland and Europe for their forage value. By supporting this competitive breeding programme for over 30 years, Switzerland contributes to the local protein supply, as well as to the diversification of crop rotations beyond its borders. 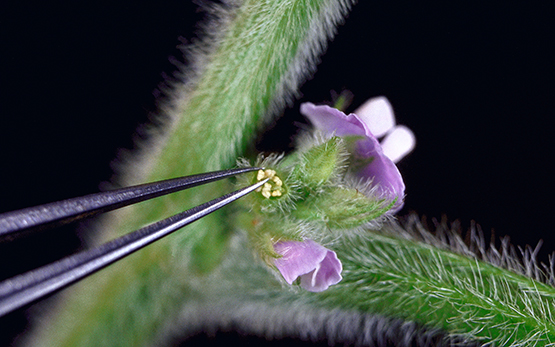 Soybean crossing is the basis for breeding new varieties. Here, the stamens are carefully removed, to prevent self-pollination. 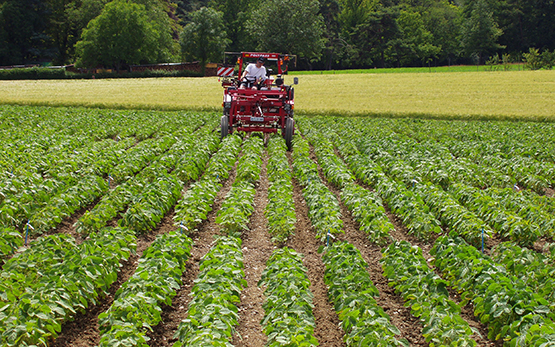 Weeding in the soybean field trial. This process helps eliminate unnecessary competition and aerate the soil, in order to stimulate plant growth. 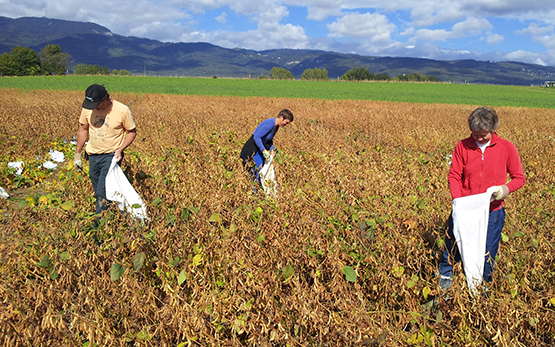 The best individuals in the field trial are selected. This is the cheapest and most effective method for improving soybean varieties. 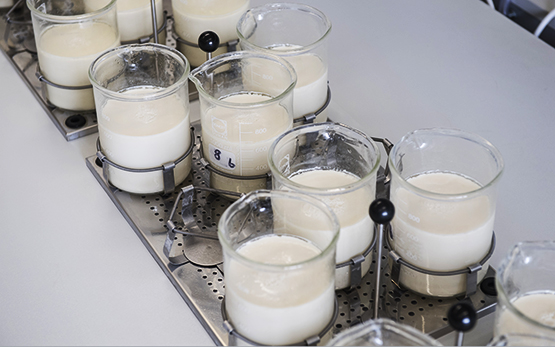 Second-last stage in the manufacture of tofu: a smooth and creamy mass, called “silken tofu”, is obtaining by coagulating the soya milk in a water bath. 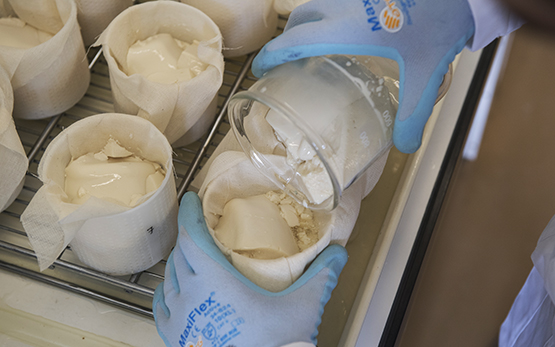 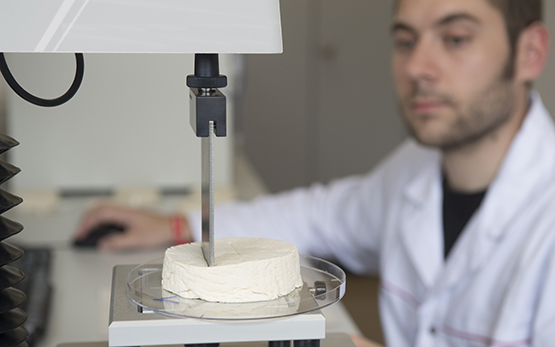 The firmness of the tofu is measured with a texturometer. Three measurements are carried out per sample.