Agroscope researchers have succeeded in cracking the genome of a quarantine grapevine disease, flavescence dorée, which had proven virtually impossible to combat to date. The decoding will enable us to identify the weak points of the pathogen so that it can be fought more effectively.

Flavescence dorée appeared for the first time in 2004 in the Canton of Ticino. Since then, it has been detected in the Cantons of Vaud, Valais and Graubünden. Affected vines must be removed and destroyed. In case of infection, measures are taken to combat the cicada species that spreads the disease. Alternatives to the use of insecticides are being sought.

The disease is caused by phytoplasmas (bacteria which lack a cell wall). To eradicate the disease, it is important to understand how the pathogen spreads and what happens to the affected plant. That’s why Agroscope researchers have cracked the genetic code of the pathogen.

The next stage consists of studying the function of the genes revealed by the sequencing of the genome. This helps us understand how the pathogen bypasses a plant’s defences and makes it sick. In addition, the researchers are analysing whether these weak points are found in all vines in Switzerland. 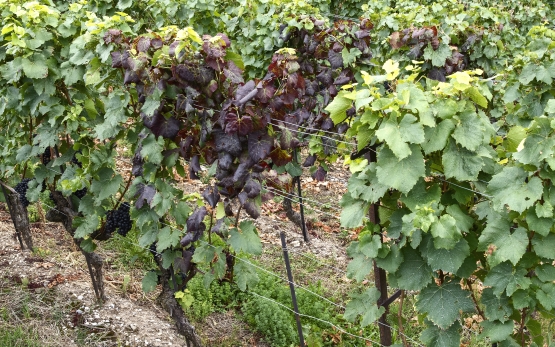 This grape disease will eventually kill the plants which are hosting it.

Modern genetic processes can be used, inter alia to find out how the pathogens adapt to plant-protection products.

Next generation biosecurity: Towards genome based identification to prevent spread of agronomic pests and pathogens using nanopore sequencing