18 October 2017 – For three days, Agroscope’s Liebefeld site was the meeting point for leading international scientists working on the development of in vitro methods for simulating human digestion. The meeting provided an opportunity for researchers to work together to find solutions to unresolved issues. A protocol based on their work is now being drawn up, and will be published in the near future.

For some time now, the Liebefeld research team has been strongly involved in developing in vitro (i.e. test-tube) digestive systems that mimic human physiology as closely as possible. Their research is conducted under the aegis of the COST Infogest consortium, which brings together the most important researchers and institutes in Europe and beyond.

Human digestion functions as a bridge between food and the person consuming it. Through the  optimised simulation of this process, we are able to determine how foodstuffs behave in the stomach and small intestine, how long it takes food to be broken down, and what nutritional components are available to the person afterwards. This opens up the future possibility of obtaining detailed information on foodstuffs and their physiological effect on humans, without animal experimentation or human studies. In future, not only will such information allow us to deduce what nutritional components are absorbed by humans – it will also help us determine how food can be produced and processed in order to optimise this absorption. In addition, such models can be used to determine the protein value of the food for the human and animal diet. Moreover, it will allow us to test the allergenicity of new proteins, i.e. their potential for triggering allergies.

After the successful publication of the method for a European-harmonised static in vitro digestive system that was relatively easy to use and provided highly reproducible, physiologically relevant results, researchers became aware of the need to be able to model the dynamics of digestion in the stomach more accurately with a semi-dynamic system, even if the conditions and execution of the latter were more complex.

From Monday to Wednesday, leading European experts in this field met in Liebefeld to find solutions for unresolved issues and to test the semi-dynamic digestion model prototypes developed at Agroscope.

The meeting in Liebefeld was a resounding success for all participants. A varied range of new approaches were developed, and solutions were found for the most important issues that until recently remained unresolved – for example, how to model the movements of the stomach when it mixes food, so as  to mimic human physiology as closely as possible. At the end of the meeting, not only were we in agreement as to the solutions for the unresolved issues – we had also begun collaboration on a detailed protocol for semi-dynamic in vitro digestion.

Our heartfelt thanks to Patrick Bischoff and Lychou Abbühl for their energetic support!

Preparation of the laboratory studies 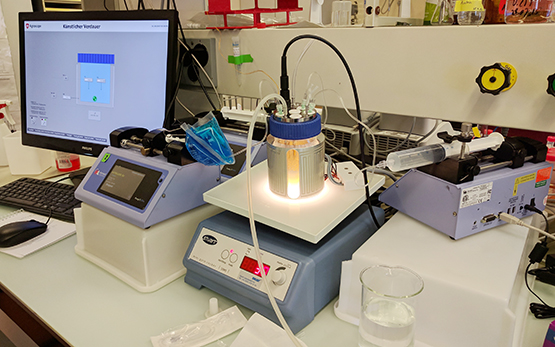 Prototype of the semi-dynamic digestion model in Liebefeld 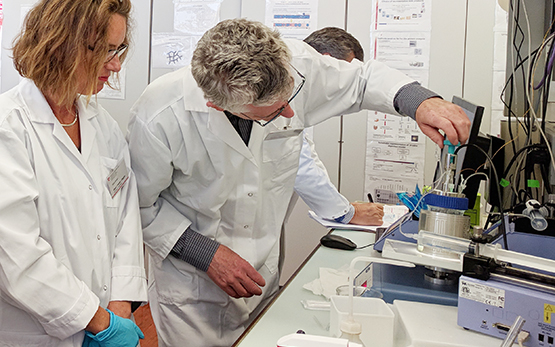 Direct implementation of theory in the laboratory