Third Year of Field Trials on the Protected Site: Good Resistance Data thanks to Bad Weather and Launch of Trial with Apple Trees

With the harvest of the University of Zurich’s genetically modified wheat and of its own cisgenic potatoes, Agroscope successfully concluded the field season of these two crops on the Protected Site in August. Although the wet spring and summer made work on the experimental fields difficult – the soil was often too wet to walk on, or even to drive machinery over – all management measures and scientific studies were carried out as planned within the scope of the current projects.

As with last year, University of Zurich researchers were able to gather precise data on the powdery mildew resistance of their transgenic wheat lines, as well as determine the yield of the different lines. The resistance effect of individual genes and of combinations of two resistance genes was confirmed this year.

The field trial with cisgenic apple trees carrying a resistance gene against fire blight from a wild apple was launched in 2016. Researchers planted the one-to-two-year-old trees as well as a number of control apple trees in a fully netted experimental facility at the beginning of May. At present, it is primarily tree traits that are being determined. As a contribution to biosafety research, experiments with non-genetically modified apple varieties have been started to determine the effect of total netting of the experimental facility against outcrossing. The evaluation of these trials will be conducted over the winter.

Further information on the individual projects

Agroscope and researchers from the Leibniz Institute of Plant Genetics and Crop Plant Research (IPK) intend to conduct a joint field trial with genetically modified winter wheat on the Protected Site in Zurich. In this wheat, sugar transport was altered, thereby increasing its yield potential. Agroscope submitted an application for the permit to conduct the trial to the Federal Office for the Environment (FOEN) in April 2016.

Further information on the project with winter wheat

Fire blight is the most important bacterial disease of apple trees worldwide. Using a genetic engineering method, researchers from ETH Zurich have transferred a resistance gene from a wild apple tree to the ‘Gala' variety. Agroscope wants to learn whether the introduced resistance causes changes in Gala's varietal characteristics. A field trial with these trees can start now on the Agroscope-Reckenholz Protected Site in Zurich. The permit to conduct the trial was given by the Federal Office for the Environment.

Further information on the project with cisgenic apple trees 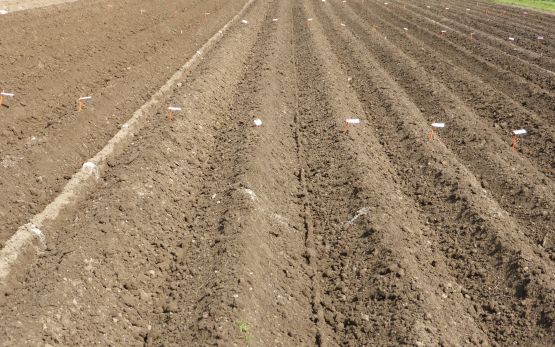 The third field season on the Protected Site started in mid-March 2016 with the sowing of the University of Zurich wheat trial. In this third year of the trial, researchers will be verifying last year's results with the genetically modified wheat lines with increased resistance to powdery mildew, as well as expanding their investigations. Agroscope completed the planting of its own trial with cisgenic potatoes in April. This year, all eight potato lines envisaged for the trials are available. These lines carry different genes, or a combination of two or three genes providing resistance against the causal agent of late blight.

Further information on the University of Zurich Wheat Project