The Federal Office for the Environment (FOEN) approved Agroscope's field trial with genetically modified potatoes from the University of Wageningen (NL) on 21 April 2015. Thanks to favourable weather conditions, the planting of potatoes with improved resistance to potato late blight took place shortly thereafter, on 24 April. In 2015, the first year of the trial, two different potato lines are being studied, with one line containing one resistance gene and the other containing two. In the coming year all eight potato lines are to be tested in the field, with initial results being available at the end of 2016. You'll find further information on the Agroscope field trial with genetically modified potatoes under the heading ‘Projects'.

Second year of the trial: Wheat now sown on the Protected Site 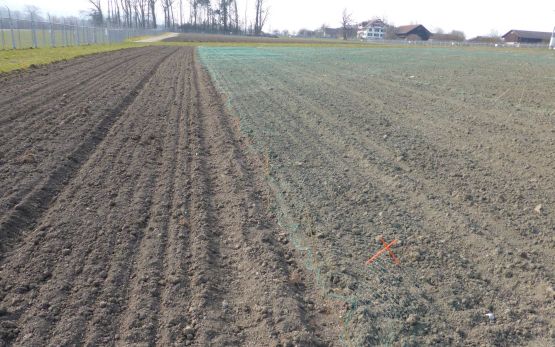 The University of Zurich is testing genetically modified wheat lines with increased resistance to powdery mildew in its field trial on the Protected Site. Sowing for the second year of the trial took place on 12 March in ideal weather conditions. As with the 2008-2010 and 2014 field trials, the aim of these trials is to gain knowledge as to how resistance genes work. In the current year of the experiment, the seven wheat lines that were in the field for the first time last year are to be studied further and compared with the plants tested earlier.

Further information on the University of Zurich wheat project