Late blight is the most important disease of potato worldwide. Researchers from Wageningen University (NL) transferred resistance genes against this disease from wild potato species to two potato varieties by genetic engineering. Agroscope wants to study whether the transferred resistance is effective under field conditions in Switzerland. It is planned to start the field trial in March 2015 on the Protected Site in Zürich, Reckenholz. The application for the permit was submitted to the Federal Office for the Environment.

Further information on the project with cisgenic potatoes

Wheat Harvest on the Protected Site 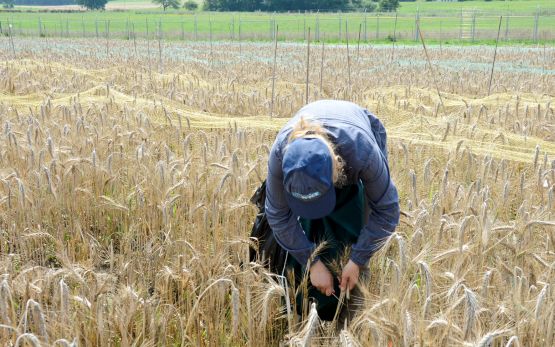 The genetically modified wheat grown by the University of Zurich on the Protected Site run by Agroscope was harvested by hand the 31 of July 2014. After drying, the wheat is threshed and prepared for sowing next spring. The non-propagatable material such as straw, stubble and roots is left on the field. The strip planted with coated triticale seed surrounding the experimental plots was harvested the 12 of August, and the harvested material disposed of in the waste-incineration plant. The test field is being prepared so that any grains that might have been lost during the harvest will germinate successfully and can then be treated with herbicide. The harvest marked the successful conclusion of the first year of the GM wheat-crop trial on the Protected Site. The University of Zurich intends to continue research activity next year as planned.