A wide variety of creatures live in the soil: invertebrates as well as bacteria and fungi.  Besides improving soil structure and composition, they can be of direct benefit to crops by making nutrients available to them or by attacking pathogens.

Earthworms are probably the best known soil-dwellers, and are considered key organisms for healthy soils, but they are far from being the only soil-dwelling beneficials. Various other invertebrates such as woodlice, springtails and mites are also important elements of a healthy nutrient cycle. Microorganisms such as fungi and bacteria go even further – some, like mycorrhizal fungi, improve plant growth directly by absorbing nutrients and passing them on to the plant roots; others attack pathogens, thereby keeping crops healthy.

For healthy plant growth and a good harvest, it is important to encourage these beneficials. This can be done by:

Such pro-soil measures pay in the long run: All of the beneficial soil-dwellers perform a valuable service, free of charge, in favour of a healthy soil which even in times of climate change delivers vigorous plants and good harvests.

Soil organisms play a key role in agroecosystems. A healthy soil system is crucial for efficient and sustainable agriculture. We investigate the interactions between plants and soil organisms to broaden our knowledge of the role they play in the provision of ecosystem services. 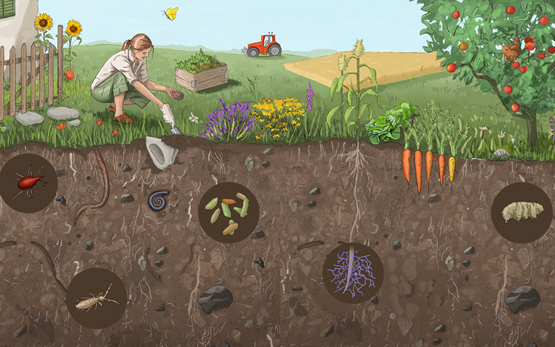