In recent decades, dairy cows have increased considerably in size as a result of breeding to higher milk production performances. This leads to large cows being kept in loose housing with cubicles built for animals with a lower height at withers. An Agroscope study illustrates how too-small cubicles can have a negative effect on the lying-down, standing-up and resting behaviour of large cows, and can lead to hock lesions. New-builds should therefore be proactively geared to the future body size of cows.

Currently, the Animal Protection Ordinance contains minimum dimensions for cows with a height of up to 150 cm at withers. Nowadays, however, it is becoming increasingly common for dairy herds to contain cows that are even larger than this. These cows are usually kept in free stalls with cubicles built for animals with a height at withers of 145 ± 5 cm. The size of the cubicles is critical, since it has a major impact on cattle performance and welfare. The cows spend around half of the day in the cubicles, resting, sleeping and ruminating.

In housing with cubicles that are on the small side, it can be seen from the cows’ behaviour that they are uneasy about lying down. They more frequently step repeatedly from one foreleg to the other and swing back and forth several times with their head lowered in order to inspect the spot on which they want to lie down. A cow with enough free space in front will swing her head straight ahead to stand up, in order to raise her hindquarters before she straightens her forequarters. If the dimensions of the cubicles are too small for the animals, a hesitant or sideways head-lunge movement can be observed when they stand up. A cow lying with her hindquarters on the curb board of the cubicle is also a sign of too little space.

These findings are the result of a study conducted by Agroscope at the Centre for Proper Housing of the Federal Food Safety and Veterinary Office FSVO. For unimpeded movement sequences when lying down and standing up, it is primarily the length of the lying area, but also the length of the head space that is the critical factor.

Data from the study with large numbers of animals

The Agroscope study observed a total of 144 dairy cows, half of which had a height at withers of between 140 and 150 cm or over 150 cm, on eight farms. In around half of all observations, the cows touched the control elements such as the brisket board, cubicle partition or curb board when lying. If, however, the lying area was generously dimensioned in relation to the cows‘ body size, the cows more frequently lay comfortably. In around a third of all observations, the cows hit against the control elements such as the cubicle partition, neckrail or frontrail when lying down and standing up, and the smaller the cubicles were relative to the body size of the animals, the more frequently this occurred. Before lying down, the cows inspected the surface of the lying area with a similar frequency, repeatedly swinging their heads and stepping from one foreleg to the other. This behaviour also decreased noticeably in the case of larger lying areas. In over 40% of the standing-up processes, the cows performed the head lunge sideways. The shorter the head space of the cubicles, the more often the cows performed the head-lunge sideways. Although the study was conducted on farms with deep-bedded cubicles, hock lesions were common, but less so when the length of the lying area was generous in relation to the cows‘ body size.

These results show that the cubicles in new-build dairy-cow housing should be designed with generous dimensions, since cows are likely to increase in size as a result of breeding to higher milk production performances. 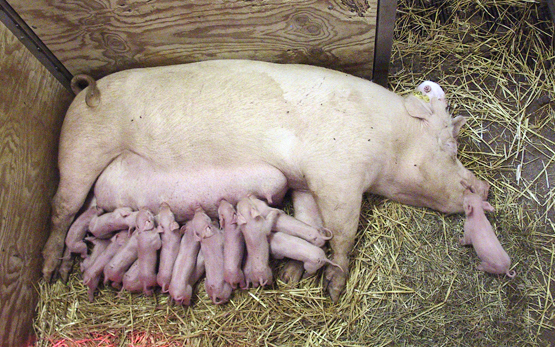 Animal-Friendly Housing of Ruminants and Pigs

Those who drink milk and eat meat want to be certain that farm animals are housed according to their needs. Agroscope tests whether housing systems for ruminants and pigs are animal-friendly.