Can the human gut microbiome be optimised through the dietary uptake of certain bacteria? Researchers from Agroscope and the University of Bern analysed the potential of lactic acid bacteria from the Liebefeld strain collection in this respect. The bacteria have been isolated and collected from Swiss dairies since the beginning of the 20th century and archived at Agroscope.

The gut is one of the most important human organs, performing various critical tasks such as the digestion of food and the use of nutrients. At the same time, it is of key importance for our immune system. Billions of microorganisms, referred to collectively as the gut microbiome or gut flora, colonise the gut. They have a major influence on our health, in part since the immune system is crucially dependent on the equilibrium of this microbial ecosystem.

Today we know that a wide range of gut microbes has an especially positive effect on human health; however, our Western diets, characterised by a limited range of nutrients, put this diversity at risk, encouraging an imbalance. This can contribute to the development of chronic diseases such as excess weight, diabetes or inflammatory bowel and autoimmune diseases, and even mental disorders.

A possible solution might be the dietary supplementation of bacteria: studies with mice have shown that the consumption of certain bacteria can restore gut equilibrium. Moreover, researchers have recently shown that lactic acid bacteria from food – particularly from fermented foods – can colonise the human gut.

Guy Vergères, a nutrition specialist at Agroscope, sees particular potential in the strain collections from the dairy sector: “The bacterial collections arising from a century of research in the dairy sector could be used specifically to increase the diversity of the gut microbiome.” The bacteria used in cheesemaking were collected over the years from various cheese dairies. Today they are archived at Agroscope Liebefeld and reproduced for cheese production. An important aim of the Liebefeld collection is to safeguard the quality of Swiss cheese.

As part of the ‘Polyfermenthealth’ project, and in order to increase the potential of these cultures for improving the gut microbiome, researchers from Agroscope and the University of Bern used a computer simulation to investigate the genome (sum total of the genetic information) of 626 bacterial strains from the collection, the majority of them lactic acid bacteria. One bacterial strain per species was then selected. The genes of these 24 strains were then compared with the gut microbiome of four healthy humans.

The analysis revealed that together, the 24 bacteria could cover around 89% of the biochemical functions of the human gut microbiome. In other words, the microbial collections from the dairy sector could potentially be a worthwhile source of bacteria that contribute to a healthy human gut microbiome.

Guy Vergères is delighted with the clear-cut result: “Our study has shown that the Liebefeld strain collection possesses an important genetic potential. This leads to the possibility of developing – based on these bacteria – new (fermented) food products that mitigate the negative effects of the Western diet on health.”

The potential use of these bacterial strains for different applications in food production is currently being investigated; for instance, bacteria that produce vitamins and immune-regulatory molecules in yoghurt are being selected. In particular, the combination of several strains which complement one another on a biochemical level could be a new, highly promising concept for the food industry. This approach could in turn lead to a new range of products that meet the growing demand for wholesome, natural foods. 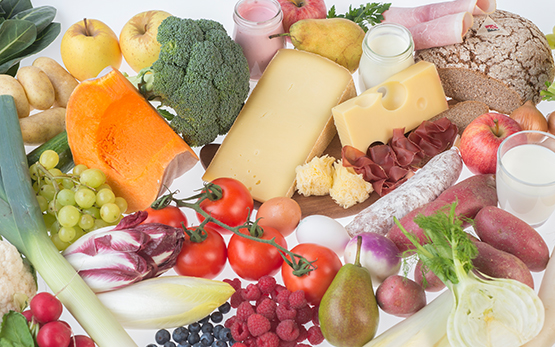 Since 2015, Agroscope has placed its emphasis in the food sector on microbial systems. In the Human Nutrition Division, the physical and biochemical effects of fermented or cultured foods (especially yoghurt and cheese) thus form the focus of research, with the aim of enabling the identification and evaluation of potential health benefits and risks.