1. What can I do if a spot a mass flight of cockchafers on my land?

2. How much does controlling cockchafer grubs with Beauveria fungi cost?

For a canton-coordinated procedure, one must reckon on a cost of around CHF 800 to CHF 1000 per hectare. Such an approach has the advantage of the Pilzgerste (‘inoculated barley’) being available as a bulk buy, and hence at a cheaper price. The subsidies paid by the cantons vary, ranging from 30 to 90%. For decades now, the canton of Thurgau has even had a ‘grub fund’ – funded by the agricultural sector – which finances the control measures.

3. How can I get the canton to co-fund this control campaign?

Coordinating a campaign with other farms is the ideal approach. You should therefore contact your canton’s plant-protection agency.

4. How long does this fungal control method remain effective?

In order to survive, the Beauveria fungus needs grubs to infect. Hence, the fungus remains in the soil as long as there are cockchafer grubs in it. Experience has shown that these control interventions can remain effective over several cockchafer generations.

5. Can I buy these fungi in stores?

The inoculated barley (‘Pilzgerste’) is commercially available. It’s important to look out for a high-quality product. The product must be applied as quickly as possible after purchase, within the next 1–2 weeks. Until then, it must be stored in a cool location, at 5–10 °C. The material is sensitive to ultraviolet light, and must not be exposed to the sun.

6. What common mistakes are made when applying inoculated barley?

Improper storage creates problems. Heat and sunlight destroy the fungi, so the inoculated barley must be sown 5–8cm deep with the no-till seeder and the soil must then be rolled in order to cover the kernels again.

7. Which species of grubs are in my soil?

The grubs are most easily recognised by their locomotion. Place the grubs on a flat surface, e.g. on a table or plate, and watch how they move.

Cockchafers move sideways. If the grub crawls forwards on its belly like a caterpillar, then it is a garden chafer or European June bug. These grubs are treated with another fungus, the Metarhizium fungus.

Rose chafer grubs crawl on their backs only. A beneficial which feeds on decomposing matter with its weak masticatory organs, the rose chafer grub is often found in compost heaps. Care should be taken not to transfer it with the compost into planters, as the limited amounts of decaying material these contain mean that the rose chafer would then actually have to nibble at the plant roots in order to survive.

8. How can I tell where the chafers lay their eggs?

Cockchafers and garden chafers stick to their habitats, June bugs less so. We recommend test digs in the autumn if you observe a lot of chafers in your area, since even well-vegetated meadows where the damage is not yet visible may harbour large populations of grubs in the initial stage.

9. My meadow is already completely brown. Does it still make sense to implement control measures there?

Yes it does. Find out which species of grubs you are dealing with (cockchafers, garden chafers or European June bugs) and if they reached their final stage already. If so, control measures should only be implemented against the next generation, after the flight and after egg-laying.

10. Who will help me if my land suffers erosion owing to damage by cockchafers

This sort of major damage implies large grub populations. Your cantonal plant-protection agency together with Agroscope experts will give you advice appropriate to your location

Grazing cows or horses have a certain reducing effect on grub populations. Particularly in August, the grubs are in the upper soil layers and are decimated by trampling.

Entomopathogenic fungi parasitise insects, either killing or disabling them. Fungi of the genera Beauveria (white muscardine) and Metarhizium (green muscardine) are the best studied. Entomopathogenic fungi occur naturally in the soil and, depending on the species and strain, infect different species of insects. Fungi that parasitise grubs can be cultured in the laboratory, providing an efficient method of biological control.

The fungal strains are cultured on sterilised barley grains, on which the fungus forms its spores. The inoculated barley kernels are applied to the infested areas using a no-till seeder. Timing of the application has to be adjusted to the developmental cycle of the target species. In addition, the soil needs to be dry enough to drive on, but moist enough to provide suitable growing conditions for the fungus. Grubs coming into contact with the inoculated barley kernels are infected and killed by the fungus. The fungus forms spores on the grubs’ bodies, multiplies in the soil and goes on to infect further grubs in a chain reaction. This amplifies the effect of treatment, which persists for several years.

The long-lasting effectiveness of the treatment offsets the high initial costs. In addition, in cases of regional mass infestations, the Swiss cantons often participate in the organisation and funding of grub control. 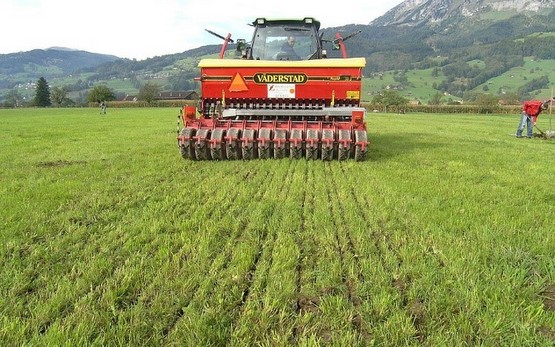 Inoculated barley is applied to the soil using a no-till seeder. 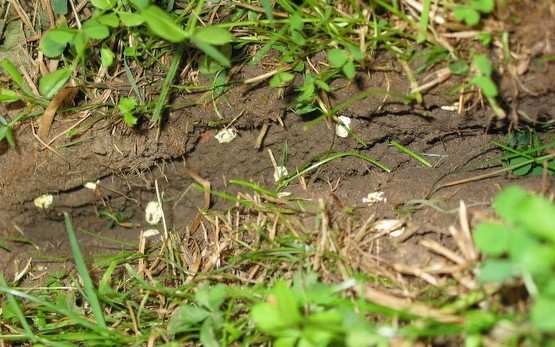 Inoculated barley kernels in a furrow made by the no-till seeder. 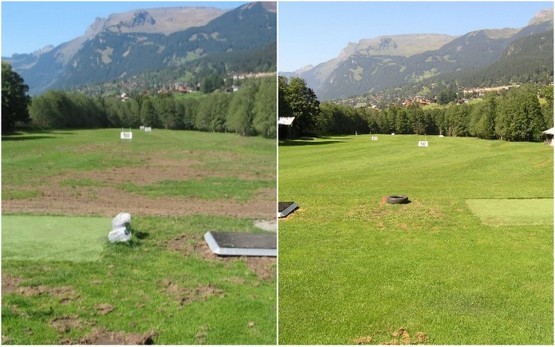 A golf course damaged by European June bug grubs: (a) before and (b) one year after treatment with inoculated barley kernels.