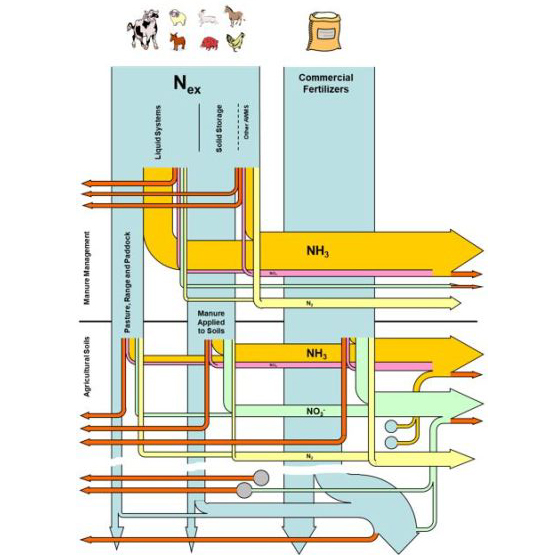 Additionally, CO2 can be either released from agricultural soils through microbial respiration or chemically bound to other matter. The respective source strength is currently estimated at 0.6 Mio t CO2 equivalents.

A detailed emission inventory is essential for the identification of emission hotspots and related mitigation strategies and measures. Accordingly, Agroscope quantifies greenhouse gas emissions and carbon sequestration in Swiss agriculture with detailed and integrated models. The general modelling framework is based on the IPCC guidelines for national greenhouse gas inventories (IPCC 2006). However, in many areas the methodologies were adapted to the specific conditions of Swiss agricultural production. Furthermore, the methods are continuously supplemented with the latest scientific findings of Swiss and international research institutions. The resulting emission estimates are an important contribution to the Swiss Climate Reporting under the UNFCCC (FOEN Climate-Reporting), and support policy decisions of the Federal Office for Agriculture (FOAG, BLW Klima).

Between 1990 and 2016, greenhouse gas emissions from the agricultural sector decreased by 10.6%, mainly due to reduced stocks of cattle and higher production efficiency. However, to reach the ambitious goals of the Swiss agricultural climate strategy (Climate Strategy Agriculture), further efforts are necessary. In this context, the agricultural inventory serves as a suitable framework for an integrated analysis of technical and structural mitigation measures. It not only describes the strengths and significance of individual source and sink categories, but also the underlying processes and their interactions. As a result, it is able to identify dislocations of emissions (e.g. along the nitrogen cascade) as well as possible pollution swapping (e.g. between ammonia and N2O) during modelling of mitigation measures.

In a series of additional projects, further aspects such as an integrated view of emissions along the whole food chain (consumption perspective) and modeling of greenhouse gas balances at the farm scale are being explored.

Key figures of individual source and sink categories, emission factors and other relevant parameters, and documentations of the methods are all publicly available on the website of the Federal Office for the Environment (FOEN Climate-Reporting), or directly from Agroscope.