Agroscope, plant-protection agencies and affected farmers launch the 2021 campaign for controlling cockchafer grubs in the mountain region with naturally occurring fungi. Over 350 hectares of meadowland are to be inoculated with the Beauveria fungus in April and May. This integrated plant-protection method reduces cockchafer grub damage by up to 80 per cent.

Thanks to global warming, our summers are growing longer and pests are to be found at ever-higher altitudes. Cockchafers have therefore also become a problem in mountain regions. The beetles need semi-natural areas that allow their larvae to grow undisturbed for three to four years in the soil. The cockchafer grubs feed on roots. A mass infestation can completely destroy the sward. If large patches of grass on the steep slope die off, there is a danger of mudslides and landslips, with high repair costs for farmers, municipalities and cantons.

For this reason, cantonal plant-protection agencies regularly call for farmers to report the emergence of cockchafers, to allow for a coordinated control approach. The special thing about cockchafers is their regionally synchronised development. Based on their mass occurrence in the ‘flight year’, it is easy to forecast the year in which the greatest damage will be caused by a specific cockchafer population – generally the second year of larval development.

Now recognised worldwide, this method for controlling pests with natural fungal pathogens was developed and optimised over the years by Agroscope. The Beauveria fungus, which acts specifically on cockchafers, is first bred on sterilised barley kernels. This ‘Pilzgerste’ (inoculated barley) is then applied to the infested spots with a seeder. Last year, a roller equipped with injection valves, suitable for use on slopes, was used experimentally for the first time to inject fungal spores into the soil in liquid form. This method also produced initial successful results in the autumn. This flexible application technique is particularly promising for berries and fruit, owing to the small gaps between plants.

The EU has recognised the potential of this strategy, and is funding a further Agroscope research project as part of the Horizon 2020 research programme, which focuses inter alia on the control of the newly arrived Japanese beetle. 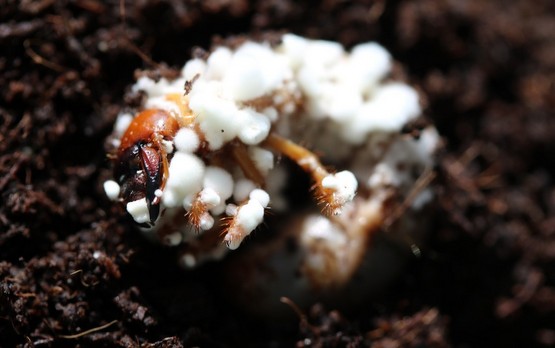 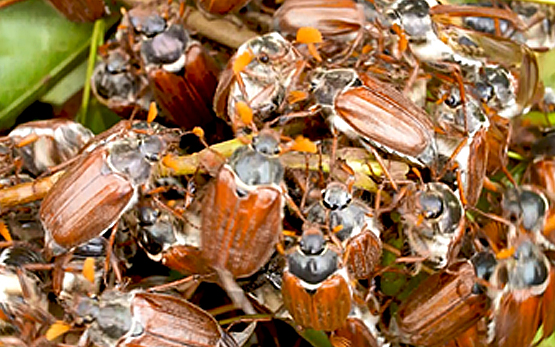 Due to global warming, cockchafers are colonising ever-higher altitudes and causing major damage on steep slopes. 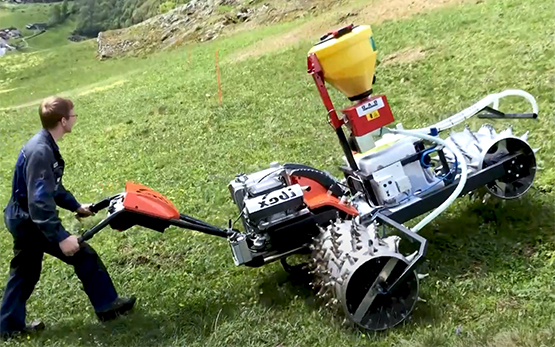 Used on steep slopes: a roller equipped with injection valves sprays the fungal spores into the grub-infested areas.